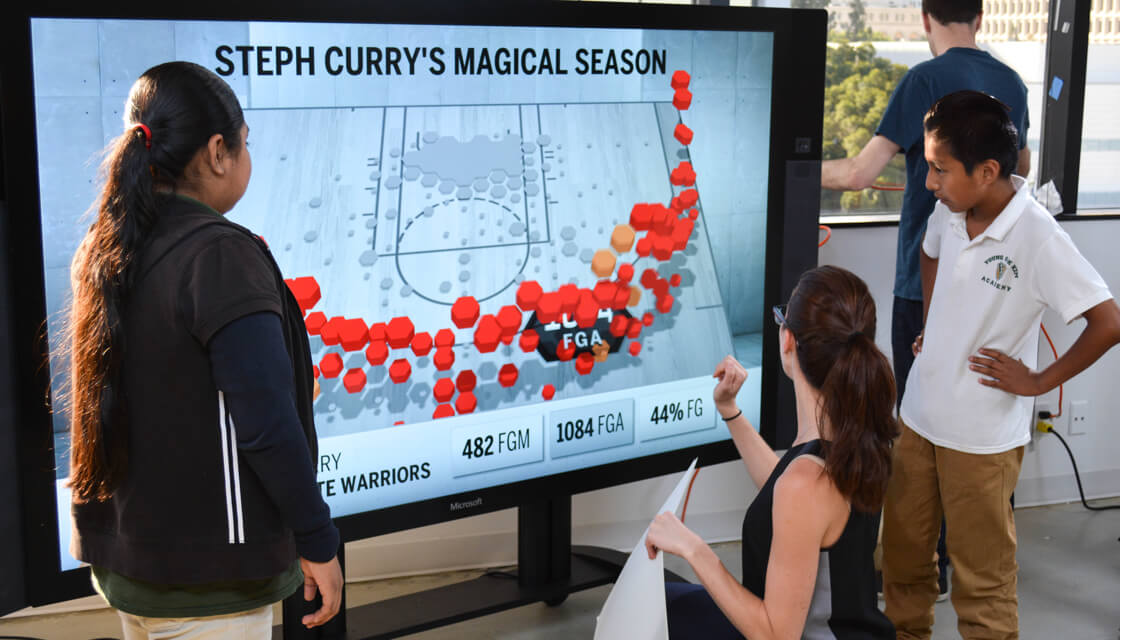 Second Spectrum, the Official Optical Analytics Provider of the NBA, developed an interactive data visualization platform around basketball that allowed students to explore concepts in statistics and probability. This software was used in combination with a curriculum designed to increase interest and engagement in STEM fields.

Over the course of the 5-week program at HOLA's Scientific Arts Department, students learned the mathematical concepts necessary to analyze visualizations like basketball shot charts and histograms. At the conclusion of the course, students applied the concepts taught by writing and performing their own data-driven stories around their favorite NBA players.

Committed to addressing the lack of diversity in STEM-related industries, Second Spectrum created this basketball-themed course to get young students more excited about fields related to math, data and engineering. Research suggests that one way to increase engagement in STEM studies is to orient lessons toward students’ interests. Second Spectrum employees, many of whom come from backgrounds in academia and education, served as teachers throughout the course, including Emma Cunningham, senior software engineer and STEM educator.

“Increasingly, our world is a data-driven one,” Cunningham said. “For young people to be able to participate in enacting change in their communities, it is vital that they have access to equitable educational opportunities that empower them to use data in ways that are personally meaningful to them.”

Prior to founding Second Spectrum, CEO Rajiv Maheswaran and COO Yu-Han Chang were professors at USC, co-directing the Computational Behavior Group. Much of their research focused on alternative methods for engaging students in STEM learning activities.

"As an organization, we are excited and motivated to help bring more people into STEM especially for those who have not had the same opportunities to participate in these fields," said Rajiv Maheswaran, CEO of Second Spectrum. "We believe sports is a fantastic, fun and effective way to achieve this and make people more data literate in the process."

Their desire to make the world a more data literate place has manifested itself in the products created and values established at Second Spectrum. As such, giving back to the community via STEM education initiatives has become a company priority. Second Spectrum plans to expand their STEM software, beginning with implementation across additional LA-area schools. Also, for the third consecutive year, Second Spectrum sponsored CODEchella, a week-long coding bootcamp for high school dropouts in the Los Angeles area. As presenting sponsor, Second Spectrum provided volunteers and financial support that allowed students from across Los Angeles to learn the fundamentals of web design, programming, and project management.