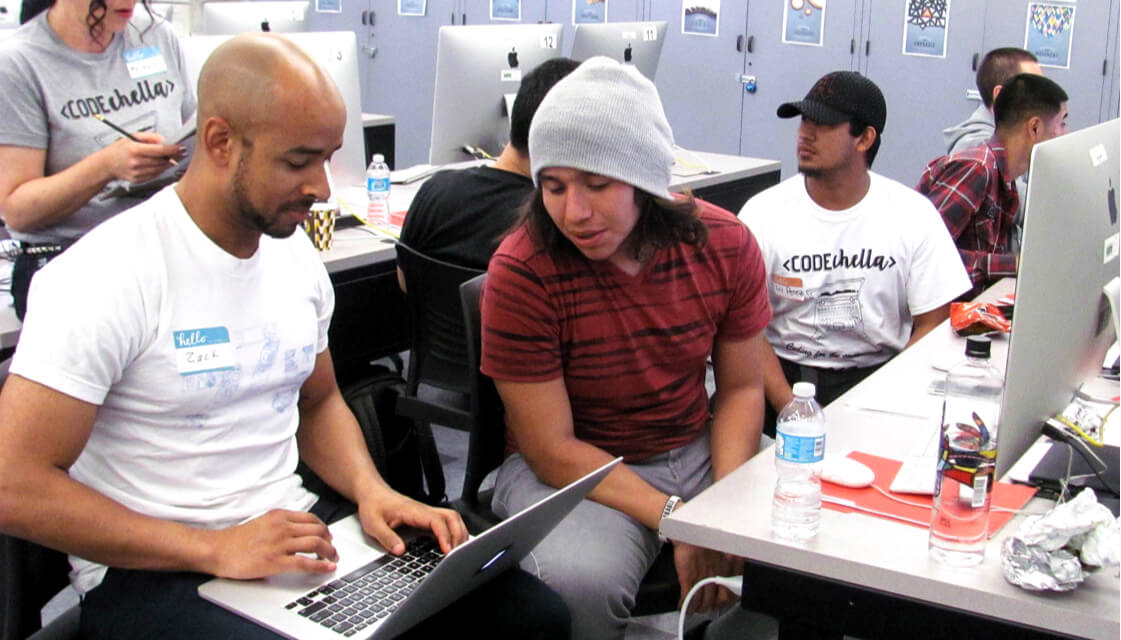 On Saturday, April 8th, YouthBuild Charter School of California (YCSC) and presenting sponsor Second Spectrum, hosted a 12-hour coding event called CODEchella at Los Angeles Trade- Technical College. At the event, twenty-five YouthBuild students worked in teams of three to five alongside coding mentors from local tech companies, including Factual, Second Spectrum, Firebrain, and Collab, to design websites for small businesses in South Los Angeles. The students, all of whom are between the ages of 16-24 and are former high school dropouts, previously had little to no experience in coding. To prepare for the event, the students spent a week of their Spring Break attending a coding boot camp taught by Emma Cunningham, Senior Software Engineer at Second Spectrum. The boot camp included classes in HTML, CSS, JavaScript and Adobe Photoshop, designed to help the students learn skills that could translate into jobs to lift them out of poverty.

“I was excited to give up my Spring Break to learn more about coding,” said student Diana Rodriguez, who commuted two hours from Palmdale every day to attend CODEchella boot camp. “I learned more than I expected, and I would like to continue this journey because CODEchella made me want to pursue a career in coding.”

At CODEchella, students designed websites specifically for local clients to help give back to the South L.A. community. By working with their clients to design a website that met their needs, the students had an opportunity to not only build their web design skills, but also their entrepreneurial skills. This year’s clients included Simon’s Burgers, the Christian Food Bank, Cindy’s Shoes, and California Body Shop.

“The students did an amazing job capturing the idea and vision of California Body Shop and turned it into a great website,” said client Angelica Hidalgo. “We are so thankful to the team of students Luis, Daniel, and Ricky.”

A panel of industry leaders-- including Second Spectrum CEO Rajiv Maheswaran and Project Manager at the Honest Company Sofia Ty—judged the websites, and awarded prizes for best overall website, best project manager, best client management, and best presentation, as well as certificates of achievement to all of the students for completing 40 hours of computer science coursework.

At the Awards Ceremony, CODEchella Founding Partner Colocation America announced that they would be launching a new scholarship fund for current and past CODEchella participants.

“Over the past four years, I have seen a community take form with one goal in mind—sparking the love of coding in young people,” said judge and event sponsor, Colocation America’s VP of Online Strategies Sam Walters. “But CODEchella is, hopefully, only the beginning of the journey for these young people. For those who want to make it a full career, I hope that the CODEchella Scholaship Fund aids them along the way.”

CODEchella creates an environment for young people who are traditionally underrepresented in STEM (Science, Technology, Engineering, and Mathematics) fields to present their skills and work alongside tech professionals, who are also excited to give back to the community and work with the next generation of STEM leaders.

“I am so honored to have worked alongside students who are so passionate about giving back to their communities,” said CODEchella Founder and YCSC’s Director of STEM (Science, Technology, Engineering, and Math) Nadia Despenza. “The purpose of the event is to teach young people about technology and create career pathways for those who are underrepresented in the STEM fields. Most importantly, CODEchella is about educating young people on how to empower themselves.”

“The whole event was really inspiring,” said their mentor Paul Chaikan, a Data Visualization Specialist at Second Spectrum. “It became clear early in the day that the students on our team were brimming with creativity and talent. They were diligent and hilarious, and they made an awesome website.”